If you would like to learn more about Blue German Shepherd and its unique colors, keep reading below to see if these dogs are worth it!

Although the German Shepherd was considered as a guard dog, it has proven to be a very effective dog over the years, serving as guide dogs, search and rescue dogs, police and military dogs, and even pet dogs!

There is some disagreement in the German Shepherd dog community, as Shepherd’s blue colouring does not alter its qualities, and hence many argue that they should be accepted by the AKC. Others argue that the blue colour is the result of a gene mutation and that it should have been bred away over time.

The Blue German Shepherd is extremely similar to other German Shepherds; the only distinction is their fur colour. They are a huge breed of dog, and males weigh between 75 and 95 pounds and reach a height of 26 inches. The females are slightly smaller than the males, weigh between 55 and 73 pounds, and stand no taller than 24″.

These dogs’ heads are domed and have a long, square muzzle. Their ears are upright and their necks are lengthy, allowing them to sit low when racing or stalking. They are an extremely powerful breed that frequently resembles its wolf forebears.

Blue German Shepherds can have either a medium or a long coat. They both have a double coat, with a thicker guard layer and a softer undercoat that helps keep them warm when they are out working as working dogs.

Because these dogs are prone to shedding, they may not be the perfect fit for people with allergies. However, a regular grooming programme, which we shall discuss in further detail below, will assist to minimise the quantity of hair shed by these dogs.

They are loyal and family-oriented dogs. Because they are working dogs, they will believe their role is to guard you as a family and are noted for being vigilant and cautious, occasionally barking in response to perceived threats.

While human coexistence is important for any dog, a good relationship with a Blue German Shepherd will ensure that they can communicate well with the family. Socialization is also critical when it comes to puppies.

These canines are extremely fun and active and enjoy being outside exercising. Additionally, they require a high level of mental engagement, as they are highly clever and dislike being left alone. They may become bored and display destructive behaviour due to anxiety about separation if left alone for too long. Therefore, do not pet these dogs if you spend hours each day outside!

Socialization is important for your Blue German Shepherd. This is largely because they are active dogs and will think it is their responsibility to monitor you. Additionally, due to their hunting drive, they might be distant towards youngsters.

At an early age, you should let your dog see and hear new things, as well as meet new people and animals, in a calm and controlled way. This will help them learn that there is nothing to fear. In addition, they will become well-rounded dogs if they live with each other for a long time.

Blue German Shepherd puppies are an excellent choice for all active dog owners, whether they are families, singles, or couples. These canines are more uncommon than their tan and black saddle counterparts.

Few breeders specialize in this unusual hue, preferring to offer the much more common tan colour variety, which might make locating a reliable breeder more difficult.

Blue German Shepherds are bigger canines with greater litter numbers, averaging eight puppies each litter; however, this number can range between one and 15 puppies.

If you would like to adopt it, the German Shepherd Club of America maintains a list of rescue organizations available throughout the country.

Blue German Shepherd is a strong variety that grows well in all three of the following diets:

Maintain a consistent diet and food type; dietary changes might upset your dog’s stomach, especially when they are puppies.

Raw fish is an excellent example of a healthy and nutritious raw supper for your dog. Meat is lean and high in protein, and Omega-3 fatty acids are best for their coat.

Blue German shepherds are highly clever shepherds of dogs. They were raised to work, and as a result, they have an innate desire to learn; thus, with ample encouragement, training should be a breeze.

These dogs are extremely loyal canines and hence frequently exhibit separation anxiety. This is treatable from an early age and should be handled nearly immediately upon bringing your new puppy home. Allow your puppy to be alone for brief periods of time (no more than thirty seconds) followed by lots of praise and reward.

Over the next several weeks, gradually increase the duration of this time until they can be left unsupervised for longer amounts of time.

Numerous training manuals will urge you to employ a dominance-based strategy when training a Blue German Shepherd dog.

However, this practice is out of date and will really harm your dog. These techniques focus on intimidation and fear, which may be extremely unpleasant for your dog and may even cause him to develop a bad relationship with the owner.

The Blue German Shepherd is a devoted and affectionate dog that will make a wonderful family member. With a unique gene conferring a stunning blue coat, these pups have the same outstanding disposition as their German Shepherd siblings and make excellent working dogs as well as protection dogs. Although they have high grooming and exercise requirements, you will enjoy spending time outdoors with your Blue German Shepherd dog playing games, and they make wonderful jogging and trekking companions.

How much is a Blue German Shepherd?

You should budget between $1,200 and $1,500 for a Blue German Shepherd puppy, however, the price can vary according to the breeder.

The Blue Heeler German Shepherd is the newest one. It is thought that this hybrid was first made 30 years ago.

Do a German Shepherd with blue eyes exist?

Genetic diversity may cause German shepherds to have blue eyes, German Shepherd with blue eyes is rare, and breeders view it as a mistake. Therefore, finding these dogs is difficult. 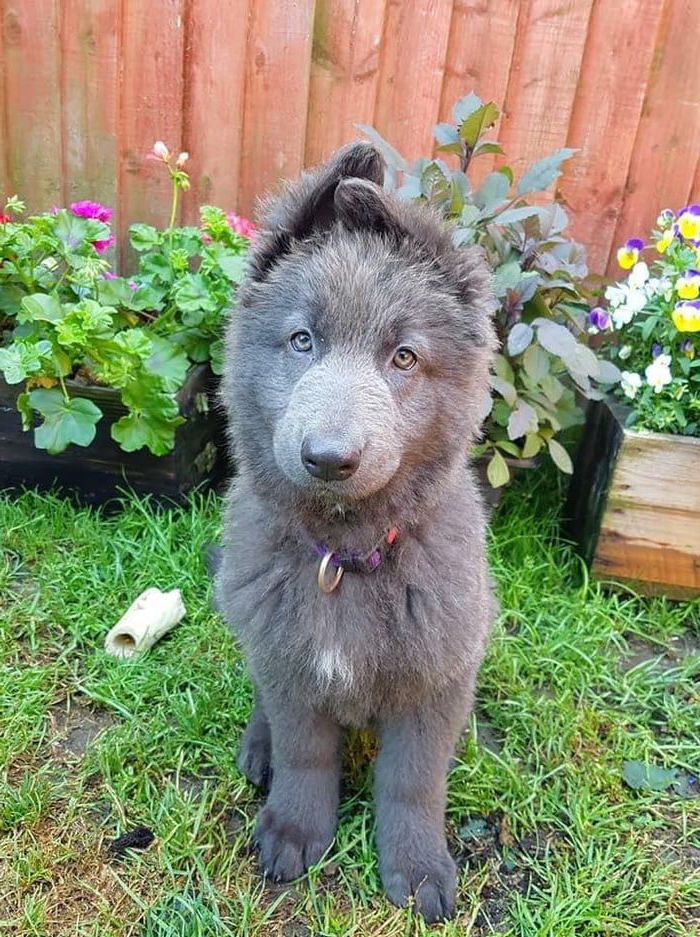