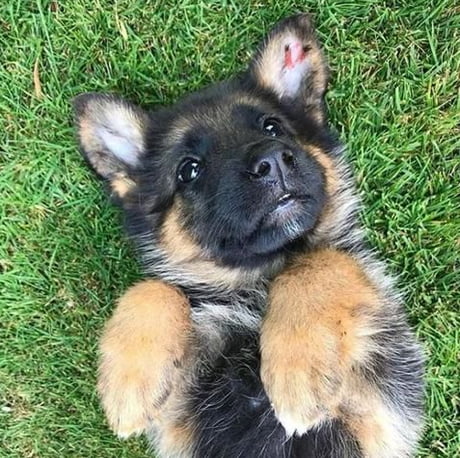 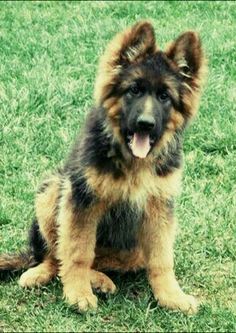 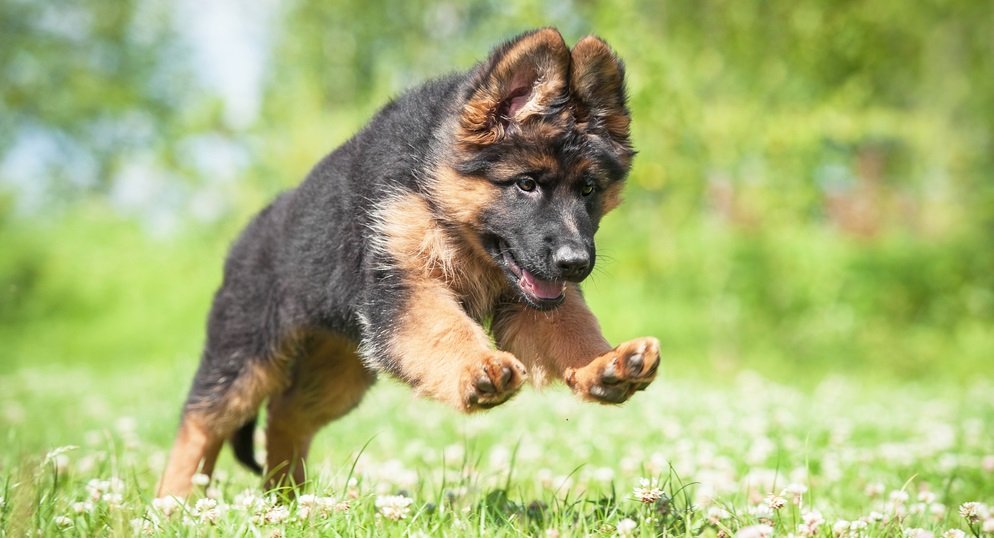 Baby German Shepherd Dogs are one of the most popular breeds today, having a large following. Like any breed, they have a charming puppy period that many people adore.

Thus, what occurs during those critical early weeks? In this post, we’ll examine the baby German Shepherd’s growth from birth to eight weeks of age!

They then acquire weight and develop physically and cognitively at a breakneck pace.

A normal German Shepherd litter contains between four to eight puppies. Baby German Shepherd still has an umbilical chord attached and may be covered with amniotic fluid when they are delivered. Their mother gnaw off the umbilical cord and clean their puppies for the first several hours. Then she concentrates on keeping her newborn puppies warm as they feed.

German Shepherd pups will simply sleep at this period to conserve energy. They will be toothless and will survive only on their mother’s milk.

A coat should be present, the color of which will be determined by the genes inherited from their parents. The most frequent coloration for this breed is black with brown markings.

They are unable to support their own weight adequately. As a result, they frequently move about on their stomachs. Their mother’s stimulation is necessary to assist them in going to the potty as they cannot urinate or defecate independently.

Baby German Shepherd is admired for its physical and mental tenacity. However, in German shepherd pups, their “guard dog” instincts have not yet developed. Rather than that, these pups desire to play all day. These endearing creatures like attention and developing strong bonds with their people.

They are a relatively young breed, having appeared in the late 1800s. Captain Max von Stephanitz, a German cavalry officer, dedicated his life promoting this breed because he admired their adaptability and intelligence. Famous German shepherd pups such as Rin Tin Tin from the 1920s become part of pop culture history as a result of their appeal over the decades.

German shepherds are not simply for show. Due to their patience and determined disposition, they make excellent dogs. Indeed, a female German Shepherd, was the world’s first seeing-eye dog, igniting a global movement in 1928.

German shepherds thrive in an energetic household or with someone who maintains an active lifestyle. Sedentary living is incompatible with this herding breed, as they thrive on learning, playing, and being a part of their human pack! German shepherd pups are prone to distraction. Even if they enjoy children and family life, it is vital to keep them focused on the work at hand throughout training to avoid sensory overload.

They like swimming (even when accompanied by their owners!), jogging, and romping in a large garden. Because they are very gregarious and friendly dogs, they thrive in a busy environment. Additionally, they require plenty of attention and cuddles. Due to their hunting ancestors, they like fetch!

Purchase of a Baby German Shepherd

Whether you choose to adopt or buy a baby German shepherd from a breeder is a personal decision that requires investigation. Fortunately, there are a few sites available to help you find a rescuer or breeder who provides healthy, German shepherd puppies.

Understanding what you’re getting into when you get a German shepherd puppy is important in becoming a good pet owner. Whether you discover a trustworthy breeder or want to adopt, it is up to you to be prepared for an energetic and pleasant new member of your family.

The primary distinction between a breeder and a rescue is that a rescue may not always have available young puppies. The advantage is that most are required to adopt out only microchipped and spayed/neutered dogs. This implies that you may wind up with a dog that is already housebroken and so does not require these typical medical procedures.

Additionally, you may locate a German shepherd mix that possesses all of the breed’s desirable characteristics, but with a little something extra. Finding a German shepherd rescue is as easy as conducting an internet search.

Puppies of German shepherds are amusing. They are fast learners and thrive on having a purpose (even if that purpose is chewing through a delectable bone). They are devoted to their people and innately self-assured in their talents. Additionally, they are destined to become excellent guardians of their houses.

Baby German shepherds require just occasional bathing and brushing. They lose a huge quantity once or twice a year as they grow. They will require a brushing every few days to remove loose fur.

While German shepherd dogs are a generally healthy breed, they have been known to suffer from bloat, which can be fatal. Additionally, as they age, it is advisable to have their hips and elbows evaluated.

With proper training and socialization, a baby German shepherd puppy may be extremely gentle friends and family guardians. This breed is suitable for busy homes, and its ingenuity and protective nature make it an excellent choice for families with children (as long as the dog is well trained).

German shepherds, if not properly taught and handled, can occasionally become agitated or even violent. Ideally, these dogs will be trained to accomplish a task and will take pride in it. Due to the breed’s intelligence and eagerness to work, training should be quite simple. Appropriate socialization is also vital to prevent your German shepherd from being worried or afraid when meeting new people or animals or seeing new situations. They are often reserved and distrustful of strangers.

Additionally, German shepherds have a proclivity for chasing cats and other small pets, making them unsuitable for multi-pet households unless they are reared together.

Baby German shepherds are a breed that is extremely athletic and lively. They enjoy running and participating in high-energy activities. Having a fenced-in area where they can mingle with other dogs is great when they are puppies. This dog was bred to learn agility, herding, and tracking.

How to Locate a Breeder of Baby German Shepherds?

The initial step should be to conduct research. Regrettably, there are some puppy mills masquerading as respectable breeders, as well as numerous internet frauds. Be alert, and join several internet communities to discuss acquiring your potential furry family member.

Always inquire, arrange to see the parent dogs or mother, and trust your instincts. If something appears to be amiss at a breeder you visit, or if the German shepherd puppy appears to be too wonderful to be true, there is almost certainly something wrong.

German Shepherd baby dogs are perennially popular dogs and will remain so for decades to come as desirable and affectionate companions. As long as you can satisfy their training, exercise, and companionship requirements, they will be an excellent addition to your house and family.

Are German Shepherds good with babies?

Yes—German shepherds are excellent family dogs and get along well with children and babies when properly trained and socialized from an early age.

No. German shepherds thrive in a large, open space with plenty of space to run, play, and exercise. They will struggle in a tiny apartment and may even become nervous in the absence of ample exploration space. Additionally, they are enormous dogs that would use a significant amount of space in smaller homes.

While German shepherds have developed a reputation as vicious dogs over time and in the media, this is usually inaccurate. While they are extremely protective of their owners and may exhibit signs of aggressiveness if they are not properly socialized, they are not innately hostile and can be trained to be inviting and receptive to new people.

How much does a baby German Shepherd cost?

The price of Baby German shepherds is not much reasonable. If you buy a dog from a reputable breeder, you need to pay around $ 1,500 for a puppy.

When do German Shepherds lose their baby teeth?

When your puppy is 3 or 4 months old (although this will vary slightly in size), his 28-dog puppy mouth will begin to be replaced by 42 adult chompers. By 6 months, his dentures will be down, and your puppy will lose his baby teeth.