WAS STEPHANITZ A VISIONARY?

Myths and facts about the creation of the German shepherd dog

1) Master Stephanitz knew few and nothing about dogs in 1899. He was learning and it took around 26 years to reach a level in what you can say he got some kind of knowledge about what it is a good shepherd dog.

2) Before Stephanitz, before the SV, there was hundreds of shepherd dogs that were identical to what Stephanitz got in 1925 with Klodo.

3) From 1905, with the Sieger Beouwulf from Nahegau, to 1924, with the Sieger Donar, the master, and I mean it seriously, was TOTALLY lost. He choose very tall dogs, 70, 71, 73 cm of height. Proportions, scale, totally outside of the standard.

4) Did he change the standard to validate those changes? The last change of the standard in the master Stephanitz era was in 1909. The next one in 1930. “General Meeting at Cologne/Rhineland on 17 September 1909

The Executive Board & Advisory Board Meeting at Wiesbaden on 5 September 1930 “. That is published in the first page of the standard. I am not guessing or doing some kind of invention or having a bad dream. He, Stephanitz have the less possible respect for the standard.

Klodo is closer to the camera lens… Donar… in the back… Donar, with its 70s (centimeters) and included in a square… is HUGE in comparison to Klodo (more in the rectangular shape). Imagine to see it side by side.

6) The original shepherd dogs in Turingia, Wurtemberg, were from 55 to 60 cm. height. For shepherding that is good. But in 1901 Stephanitz have to face the LACK OF WORK for the first 500 puppies and young dogs registered in the SV books. So he push the height to a bigger size, squared dogs. He invested 25 years (twenty five years!) in coming back to the better shepherd dog size and form.

Klodo, and others that came in the next years are very same like the dogs that Stephanitz used and knew BEFORE he form, found, establish, the SV.

Example of shepherd dog BEFORE Stephanitz start to do some breeding and establishing rules, champions, etc.

She is not descended from Horand but from a brother of Horand, Luchs (Luchs Sparwasser http:// www.pedigreedatabase.com/german_shepherd_dog/dog.html?id=26712-luchs-sparwasser-sz-155?_v=20220123122820)

Other one… Pax vom Brezental. Born in 1902. Not related to the Horand or any other “Stephanitz dog”. It was a HGH (herding dog). SZ 1448. He is one of 95 dogs FROM UNKNOWN PARENTS, not related to Horand, that formed the breed (used by Stephanitz, entered into the register book). This dog had 20 registered matings. Among them he got a breed with Nelly II (the young one), an important female dog at the time.

FINALLY… all those words about the vision of the master Stephanitz… are wrong. Totally wrong. If we repeat those words we are repeating the words established to put in the highest point Stephanitz and his work (flawless), he was the perfect breeder, the perfect master, the so perfect german that create the best dog used by hundreds in first and second world wars. Myths and legends created by Rosebeck, Kastmair, Funk, Rummel and Herman Martin.

Stephanitz never speak too good about himself. He was proud but from 1926 he kept a low profile until he quits the SV in 1935 and die in 1936. His daughter Herta was humble in her statements about his father.

The ones that build the myths, exagerations, and legends, are the ones that I have named. I repeat, is not an error: Rosebeck, Kastmair, Funk, Rummel and Herman Martin.

You will ask yourself some extra things… I put some extra answers to your future questions… (?)… here:

– What they were trying to hide? That Master Stephanitz was a very close friend of Hitler (he gave him, as a gift, a german shepherd, in 1926, the year Hitler left jail due to the revolt he initiated).

– Stephanitz was close to Colonel Konrad Most (very clever and the one who stablished the tracking dog logic and speak anr wrote before Skinner about all the reinforcements, punishments, etc.). Most was a top level member of the Nacional Socialist party, he was in charge of all the war dogs during WWW II, the war that Hitler lost.

– Stephanitz was very close friend of Himmler. He knew him from the 20s when the first Gauteliers was nominated (some kind of governors). He, Himmler, was in some moment in charge of lands of the city of Grafrath (the nearest city to the state that Stephanitz bought to have his breeding activities when he start with the german shepherd).

– Roesebeck, very close friend of Stephanitz, and his best support in the SV, he judged the females during many years. He, Roesebeck was president of the VDH and a top level Nazi party member.

All these relationships allow Stephanitz to keep his place from 1926 to 1935.

What happened in 1935? The Nuremberg laws were established. Only people that can certify 4 generations of totally German ancestors can hold public and private charges or positions of leadership. Master Stephanitz couldn’t prove that. His father was Russian, his grand grand father Russian too (he was a jeweler in the court of the Zar of Russia, he was granted a lesser nobility title). Furthermore, they were Russians that came from Polish-Jew ancestry.

The SV was put under a centralized organization and master Stephantiz had to go home. He died the next year, very worry about his wife: he had married (2nd marriage) a polish lady. Germany’s problems with Poland and the Jews, and with the Russians, come from Wilhelm I, Bismarck, Wilhelm II. And if we go back to the centuries before the 19th, then Poland was the one who invaded territories that we now call Germany (in those years they were different kingdoms, Germanic, that even fought among themselves).

So… what can do the Nazis? what can do Roesebeck and all what follow him?… tell that the one that created the best german dog, the one who put the dog in the eyes and admiration of the world… WAS NOT GERMAN? Was he Finnish, Swiss or Austrian? No. Stephanitz was descended from Polish Russian Jews who sullied the noble German blood. That couldn’t come out.

The remedy, the solution, was to raise Stephanitz, and the German shepherd he created, to a level of myth and legend. This so that no one would question the value of the work done in Germany, by Germans, for Germany.

So speaking of a visionary Stephanitz, as we have seen, is not based on reality. That is a construction of Nazism.

To Maestro Stephanitz we owe everything and even more. Not for being a visionary but for his stubbornness, resilience, focus, unparalleled administrative work, impeccable organization, iron hand, and for recognizing his mistakes, and after 25 years of floundering, correcting them.

He is the master not for his vision but for overcoming it, accepting with humility that the correct dog was the one tested by nature and by centuries of herding work in the field (where there are no contests or prizes or trophies: it serves the job grazing or not suitable for grazing work).

All the rest are modern modifications, without rhyme or reason, made from 1945 with Rolf Osnabrucker Land, Kastmair and the rest of those named. Without exception. 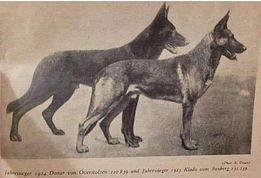 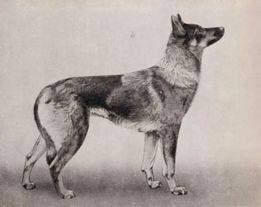 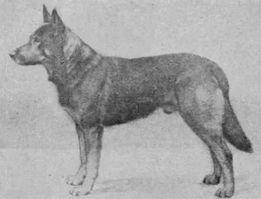